Embed the game Gummy Blocks by adding the following html code to your website:

Link to the game Gummy Blocks with this code:

Spread the love by sharing Gummy Blocks on social media, your website, blog or other places.:

Gummy blocks is a puzzle game with blocks. It's roots are with the popular Tetris game. Place the gummy blocks on the playing field. Be sure to place all blocks, if you place all blocks on the field you will advance to the next level.
Gummy blocks is an original game with colored blocks. Place them all on the field to win.
Pretty much everybody in the entire world knows what Tetris is and how it works. A video game about a series of falling blocks that you have to stack in a particular way to form a row so that row will earn you points, and if you're stack gets too high and fills up your entire screen then you lose. Sometimes you're playing by yourself and simply trying to get the best score that you possibly can. Maybe other times you're playing against someone else and trying to see either who can get the best score or who can last the longest before getting a game over. There have been many different takes on this formula over the years to be sure, but whatever the case Tetris is a classic that has withstood the test of time.

So, what does that have to do with Gummy Blocks? Well according to the description, the games roots come from the very popular Tetris game. Indeed, it holds true to that statement as the game does play quite similarly to Tetris. If you're looking for games that are like Tetris, then you will definitely like this game. However, if you don't like Tetris, then keep reading, because I think you might be pleasantly surprised by what you might find out about it in this review.

The game starts out similar enough. You're given a bunch of colored blocks that need to be stacked in a particular way. The objective and obstacles are the same as they are in Tetris which is to say that you want to make a full line in a row so that you can earn points and you don't want to fill up the board otherwise it's game over for you. However, that's where the similarities between the two games end. Let's talk about the differences between Tetris and this game.

Now in Tetris, the blocks are falling down from the top of the screen. You have to change the alignment of the blocks as they come down, but you only have so much time to figure out how they should look by the time they reach the bottom of the screen. This isn't a problem at the very beginning of the game of course. But as the game goes on it gets more challenging as the screen fills up with even more blocks. This adds a sense of pressure to the game as it's basically a time limit without really being a time limit. Some people love the pressure, for others, especially children, in particular, it can be a little bit intense and even a bit nerve-racking.

Now compare this to Gummy Blocks. Right away we have a big difference. The blocks aren't falling down at all. In fact, they're right there at the bottom of the screen waiting for you to click on them and drag them onto the screen wherever you'd like. There's no time limit of any kind in this game at all. You can take your time with this game and play at your own pace. This gives you the time to plan out each of your moves before you make them which leads to a game that a lot less stressful because there isn't nearly as much pressure as a game like Tetris. When you can see your pieces and your board without having to worry about a time limit, it makes the game a bit easier to get into.

Which actually brings up an interesting question. Who would be a good audience for this type of game? Games like Tetris usually appeal to gamers who fall under a certain list of categories. They're usually, older, into the arcade genre, and are usually at least fairly experienced with video games as a whole and thus have a certain degree of patience when it comes to games like Tetris, though just enough patience that they still count as "casual players”. This is because most of these people have adult responsibilities and thus don't have much time to play games and so when they do they only play what is quick, easy, and simple.

Now is that to say that Tetris isn't popular with children? Of course not, far from it. In fact, Tetris was quite popular back when it was on in the Arcades, when it was on the Nintendo Entertainment System, and when it was on the original Game Boy. We even now know the positive effects that Tetris even has on the minds of children as well. There are even studies about it and a term for it called "The Tetris Effect”. It increases brain activity and generally helps with problem-solving and quick-thinking skills. So, suffice to say that Tetris is a game that children can quite easily enjoy even to this day.

But this game, I believe is something a little more accessible to children, especially children of the more modern generation. Since there isn't a time limit involved this offers children the time to solve the puzzles offered on their own time without as much pressure. This a good alleviation from the pressure of other aspects of their life like school for instance. If they may have test anxieties to finish a hard test on time for instance. Here, while they move at their own pace, they will have fun while doing it, and they will get faster and better at doing it naturally without even realizing it.

That's not to say that the game is without its flaws, however. In Tetris one advantage is that you can see ahead of time what your next block is going to be as you are working with your current block. But in this game, you are given 3 blocks to start with. Just like in Tetris these are given to you at complete random which is fine, but here's my problem with it. When you click on one block and put in onto the table you would expect it to immediately be replaced with a new block underneath right? Well, that's not how the game works. Instead, you will not see any new blocks at all until you have gotten rid of all three of the blocks you have been given and every block group you are given comes in groups of three.

This may not sound all that bad, and admittedly it's not the worst problem in the world, but I feel that the game would be better if after placing one piece the next piece would come up just like it did in Tetris, rather than just leaving this blank space there. My problem with this is that it leaves this gap in my ability to plan out my next move and so I make a mistake by placing pieces in places not knowing I was going to get pieces I may or may not have needed. Given that unlike Tetris, from the very beginning of the game I can place the pieces anywhere on the board and am not limited strictly to the very bottom from the start, this can be a bit of a nuisance.

But despite this, I found myself still playing the game quite a bit. I believe that a game like this will be a great game for children and families to play. Parents can play this with their children and help them grow and learn together. Kids will have fun and it's a great time-waster that's educational without being "educational” in the traditional sense (boring). Gummy Blocks is the perfect game if you're looking for your Tetris fix. 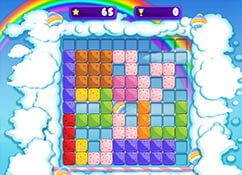