Tetris Cube is a video game created by Bubble Shooter. The goal of the game is to continually stack tetrominoes and clear lines for as long as possible. In order to clear the lines, an entire line must be filled horizontally by shifting the diffferent shapes using the right and left arrow keys to move, and the up and down arrow keys to rotate the blocks on a M Keyboard. For mobile devices, the on screen buttons are used to move and rotate the pieces, and the swap button is used to swap the falling pieces. Once a horizontal line is filled with blocks, that line then disappear creating more space to stack more pieces. The longer a player progress within the game, the more difficult the game become by increasing the fall speed of the tetrominoes. The game is declared over once a player run out of room to stack anymore blocks. This game requires a keen sense of Eye-hand coordination as well as strategic planning in order to progress to the next level. While this game is non ending, the ultimate goal is to place the highest score possible through a user interface that is simplistic enough everyone to enjoy.

Place the falling blocks on the field, make horizontal lines to remove them. When you reach the top you are game over. 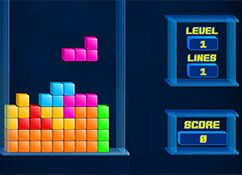 ×
Embed the game Tetris Cube by adding the following html code to your website:

Link to the game Tetris Cube with this code: