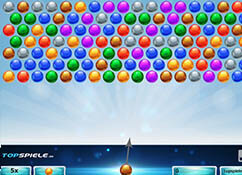 This is extreme bubble shooter, the most extreme bubble shooter game that exists, fast moving gameplay and extra objects like bombs and other powerups. Shoot the bubbles with your mouse. Bubbles extreme is fun and easy to play.You can kill some time right away, just start the game and start popping those extreme bubbles. If you pop a bomb all connected bubbles will explode. If you hit the nuclear bubble you will remove all bubbles with that color. Some bubbles are 2 colored, you can pop them with both colors connecting. Collect all pills for extra points.

The game features colorful bubbles, there are no options you can set. Once you are game over you see your score. The topscores are not saved.

Bubble shooter extreme was first launched as flash game is 2008. Now many years later it is republished as a html5 game that works on any browser and on any device.

Shoot the bubbles with your mouse or tap on your screen. Aim by holding the mouse button or pressing the screen. Release or click to shoot the bubble where you want it to go.

This is the most exreme bubble shooter version you can think of. Clear the field with as much points as you can possibly score! 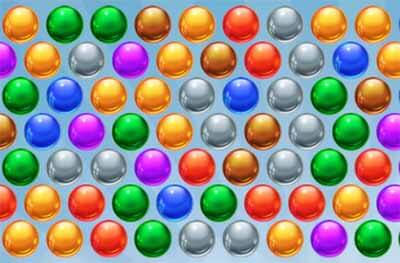 The variety of bubbles in bubble shooter extreme

In this video you can see the classic gameplay of bubble shooter extreme.


The main loading screen. Click on Play game to start the game, you will go directly to the game itself.

Screenshot of the main screen. Here you will see the bubbles and the shooter.

Extreme Bubble Shooter is a game that has a lot in common with normal Bubble Shooter, however, there are enough differences that may make people want to play this one instead if they want a greater challenge. Unlike the original, this version requires even more carful planning, and has less of a luck element involved in boosting up the score while avoiding a game over. Let's take a look at what makes Extreme Bubble Shooter special.

Like the original Bubble Shooter, Bubble Shooter Extreme is about launching bubbles, popping bubbles, and keeping the bubble cluster from touching the ground which will mean a game over. Unlike the ordinal, there is no aiming line in this one, meaning players will have to aim using their own wits.

Bubbles are fired from the launcher at the bottom of the screen. It contains a colored bubble that when fired into two or more of the same color bubble touching one another, will pop and form a combo. Unlike the first game the bubbles will not fall into a numbered grid. Instead, score is based off of how many bubbles pop at a time.

Another thing of note is that in this game there is a counter at the bottom of the screen. It starts at 4x, and lowers by one each time the player fire a bubble that does not pop any bubbles up top in the bubble cluster. When it reaches zero, the bubble cluster moves down and the counter resets at 3x. This means that players will have to play smart from the very beginning or face a quick game over.

To help make things less difficult, there is also an icon at the bottom of the screen that shows the color of the next bubble that will be loaded into the launcher. This can help players to decide which combos they should go for in order to get a higher score. For example, if there is a blue bubble in the launcher and a red one coming up, the blue one can be used to clear away other blue bubbles that may be blocking red bubbles that are needed for the next combo. Thinking ahead like this is critical in this game in order to get continuous combos, and avoid game over.

The graphics of Extreme Bubble Shooter are improved over the original, but at the same time, the entire presentation is more simplistic. The bubbles themselves are now shinier and look kind of like marbles. However, the bubble launcher is now just a bubble sitting at the bottom of the screen with no graphic of an actual launching device. The sound is simpler overall as well and only features effects for the bubble firing, sticking to another bubble in the event of no combo, bubbles popping if there is a combo, and a clicking sound as the bubble cluster gets lower to the ground.

Overall Extreme Bubble Shooter is an upgrade from the original in terms of challenge and graphics, but somewhat of a downgrade in terms of presentation. Even more so than the original the player must take time to think about the combos they're trying to set up, and not just fire randomly or they will get a very fast game over. This is a good game for those who want extra challenge and like games that require them to plan ahead.

Shoot the bubbles, shoot 2 bubbles of the same color to pop them.

×
Embed the game Bubbles Extreme by adding the following html code to your website:

Link to the game Bubbles Extreme with this code: