Tiles Of The Unexpected

Fuzzies refers to a game on the Internet that's all about matching specific colors. It's a bubble shooting extravaganza that, true to its name, is chock-full of adorable characters that couldn't be fuzzier. The primary aim behind this game is to put these beings in a row and and zap them. Many people who are familiar with Fuzzies wax poetic about it and its concept and features. They often say that playing it is simple and straightforward. Fuzzies is based on these soft and sweet beings that existed in the distant past. They resided harmoniously in a quaint settlement. Its castle, however, had a "bad guy" who was frustrated by his discoloration. That's the thing that pushed him to battle it out against all of the Fuzzies that were around him. He had an aggressive device that enabled him to fight them all as a means of acquiring their eye-catching colors. That's why he targets their formerly idyllic locale. The premise behind Fuzzies is to stop the culprit from having his way and being able to destroy all of them for good. It's to enable the Fuzzies to be able to flee the intense yet detrimental German tool forever. Players have to put together a minimum of three of the beings. They have to all display identical colors as well. Cleaning out the board is the name of the game.

Connect all Fuzzies and make combinations of 3 or more fuzzies to remove them. Complete the target on the left side to go to the next level. 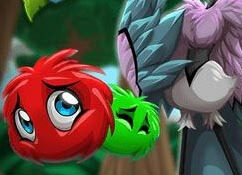