Do you like soccer and bubble shooter? Then Bubble Shooter World Cup is the game for you. The bubbles in bubble shooter world cup are colored flags of the countries that participate in the world cup. Shoot bubbles with a combination of 3 or more to make them pop. You can shoot your favorite countries like Germany, Brasil, Argentina, Spain, England and France. The bubbles make a nice soccer sound when you shoot them and make a dribble sound when you pop them. The game area is quite large so a game does take a while to complete. But we like this because who wouldn't want to play as long as possible in the bubble shooter world cup? 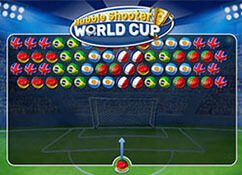 ×
Embed the game Bubble Shooter World Cup by adding the following html code to your website:

Link to the game Bubble Shooter World Cup with this code: