Gummy Blocks Evolution is a unique approach to a tried and true style of game. At first glance, you might think this is a copy of another block-stacking game, but it varies in several significant - and welcome - ways. If you enjoy spacial stacking games but also enjoy a game with a pleasing visual design, relaxing but engaging gameplay, and a great soundtrack, then this is a great game to try out. Chances are once you try it you'll find you don't want to stop.

The gameplay is a surprisingly unique aspect of Gummy Blocks Revolution. I saw surprising because, at first, you might think that the gaming methodology is the same as another famous block-stacking game. However, this game has a highly important twist: rather than the blocks descending at a pre-determined rate, they can be placed anywhere within a set grid. Further, you aren't limited by a single choice of block. Rather, across the bottom of the screen, you are presented with three shape options to choose from. Thus, you can select the shape that will best fit the current scenario and strategy. 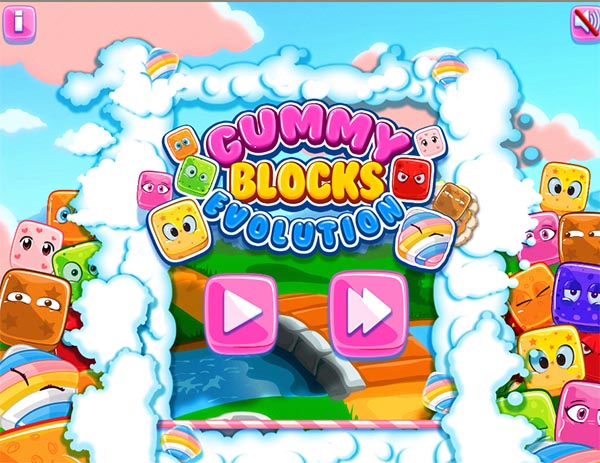 The goal is otherwise what you would expect. The goal is to stack and arrange the bock patterns in such a way that they form a complete line across the grid. Once you have filled in an entire row, that row disappears. There are bonus points to be gained by eliminating multiple rows at once or by creating other specific patterns.

The lack of falling blocks and forced shape choices is one of the most charming and different aspects of this game. Because you can take your time choosing your shape and placing it where you want it, Gummy Blocks Evolution lacks the stress and anxiety of other block-stacking games. The slower-paced nature of this gameplay method makes this a fun but very relaxing game. It's something you can play casually without devoting extraneous effort or focus. After all, you play games to have fun and relax, and this fits that bill extremely well.

The drag and drop physics of placing the blocks on the grid is an intuitive way to play, but it also has further advantages. I played this game for some time on my phone, on my laptop using a mouse, and using the touch-screen feature of my laptop. Regardless of which method you use to play it, it works equally well and provides the same relaxing but engaging experience.

The visuals of this game are truly spot-on. A lot of flat puzzle games toss random colors and designs at the screen without any real effort to form a cohesive or attractive experience. Gummy Blocks has an interesting but clearly well thought out design. The decoration is an intriguing combination of Mario-meets-Candyland. It's fun and bright without being too garish or overdone.

One of the most fun aspects incorporated into the graphics is the blocks themselves. Each individual block-style features its own face and personality. This makes what might otherwise be a simple block pattern and turns it into a more enduring and engaging character. Even better, this is not only cute, but it serves a functional purpose. When you pick up and manipulate the blocks, their expressions change. Sometimes this is a mere response to being picked up, but they also give feedback on the gameplay itself. Depending on whether or not a block is being placed over a valid location, the characters will either smile, frown, or look concerned. It's a fun and creative way to give implicit instruction without having to specifically explain how to play the game. 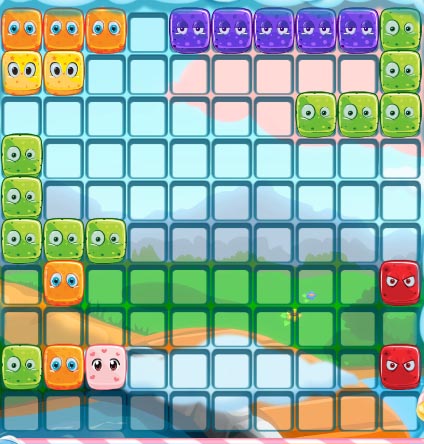 The main game screen of Gummy Blocks with it's colorful blocks.

Beyond the simple point system, Gummy Blocks rewards players with trophies and visual effects depending on which patterns they collapse and how many rows they manage to eliminate. The game has a nice progression. A lot of block-stacking puzzle games can get monotonous or boring after more than a few minutes of gameplay. This is often because they rely on lazy game mechanics such as simply speeding up the block delivery. Compared to these other games, Gummy Blocks does a much better job at progressing levels. By manipulating the shapes provided and the grid architecture, Gummy Blocks maintains a relaxing and fun tone without ever getting boring. It simply slowly increases in difficulty and rewards players for their abilities.

The soundtrack is perhaps the best aspect of Gummy Blocks Evolution. A lot of puzzle games cheap out on the soundtrack and use a generic MIDI soundtrack. Comparatively, you can tell that the developers of Gummy Blocks put a lot of time and effort into the music, and it shows. The soundtrack is a really interesting combination of a melodic guitar with a slightly cartoonish melody. It's not only catchy, but it is also really beautiful.

The music is consistent with the gameplay and experience of the game. It's fun and upbeat but also relaxing. This is a game that you could spend a lot of time zoning out with and forget about the stresses of the day. The music allows it to seem a lot deeper than a simple puzzle game and makes playing Gummy Blocks very immersive.

I do have one complaint about the music, though - it may be a little too good. For days after I played it, a lot of the tracks and melodies were still stuck in my head. Because the tracks are purely instrumental, it can become a little strange to have them playing on a loop in your head. Your friends will likely wonder what you've been humming so much. The good news is, once you tell them, they'll likely become just as addicted to the game.

Here's the best - and worst - aspect of Gummy Blocks. Once you start playing it, you will become addicted to the fun gameplay, the cheeky characters, the bright background, and the great soundtrack. Because it manages such a great combination of being challenging but also relaxing, it is a game that is hard to put down. Once I started playing Gummy Blocks I knew pretty quickly that it was something you could spend some serious time emerged in.

As mentioned before, one of the unique aspects of the game is that it presents you with three brick-shape options for each move. This is one of the mechanisms that it uses to increase the difficulty over time. As the levels pass, figuring out the best way to visualize space and collapse the most rows becomes an extremely fun and addictive challenge.

When I first began playing Gummy Blocks, I was not exactly sure what to expect. There are a lot of puzzle games on the market, even if you narrow it down to the block-stacking category specifically. Thus, to really earn my time and admiration, a game really has to differentiate itself and show me why it is different. Gummy Blocks does a fantastic job of this in a lot of ways. While the soundtrack is the highlight to me, the relaxed but increasingly difficult challenges make sure it stays fun but also low-key. Whether you use it to relax after a hard day or just to fill a few minutes when you're waiting for the bus, it's a really fun way to pass the time. In a sea of generic copies, this is a winner in the category.

×
Embed the game Gummy Blocks Evolution by adding the following html code to your website:

Link to the game Gummy Blocks Evolution with this code: