Bricks Breaker is the original brick breaker game with multiple balls. This original version does have 30 packs with 100 levels. This gives you a grand total of 3000 brick-breaking levels. The goal is to clear all bricks in the level. Each brick will have a number on top of it. This number is the number of times you have to hit it with your balls. If it says 100 you must hit it a hundred times. Now we hear you think, but a hundred times is very much? You will get a high number of balls in each level. For example level 3 gives you 50 balls to start with but if you hit the multiplier ball this will be multiplied, and if you hit another multiplier this will also be multiplied. So you can shoot hundreds of balls each turn. The trick is to bounce the balls strategically against the bricks and walls. So that you will hit multiple blocks at once. Once you get the hang of this you will fly through the levels.
Bricks Breaker is sort of the original Atari Game Pong only on steroids, crossed with Tetris. There are three ways to play, a Bricks Breaker game that determines your levels of play, an endless, classic game, and a 100 ball challenge.
Essentially, in Bricks Breaker, a stream of balls moves at lightning speed to wherever you have laid bricks. The idea is to rack up as many points as possible by bouncing the balls, Tetris style, for as long as possible. Since there are hundreds of levels, it gets increasingly more difficult to advance from level to level, and most people resort to one of the many Brick Breaker hacks on the internet. Earning enough points lets a player secure rubies and it's also possible to buy rubies if you wish. With Rubies, you can change the size of the streaming balls, which makes the game more fun.
Classic Mode Tips
For every move a player makes they rack up points. The as a consequence, the more moves a player makes, the more points they earn. Most players try to shoot the balls between the gaps in the bricks so they bounce as many times as possible.
100 Ball Challenge
This is basically a one-shot game, and points add up increasingly as bricks are knocked off.
Bricks Breaker Power Tips
An easy way to gain points is to watch an ad after each game. Ad videos will generate as many as 10 rubies per ad watched if a player does not want to buy rubies. Another way to earn rubies is by getting more points, and if a player is at level 7 or 10 for example, an easy way to earn points is to go back to an easier level, as your total score will be comprised of all levels earned. Players need an Android or IOS phone to play, so watch for game requirements, although the game itself is free. 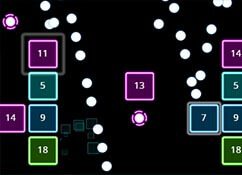 ×
Embed the game Bricks Breaker by adding the following html code to your website:

Link to the game Bricks Breaker with this code: