Embed the game Bomb It 5 by adding the following html code to your website:

Link to the game Bomb It 5 with this code:

Spread the love by sharing Bomb It 5 on social media, your website, blog or other places.:

Plant bombs and destroy your enemies in Bomb it 5. The newest of the Bomb it games.
Overview
Bomb It 5 is a flash game that can be played in a single-player or multi-player mode. Inspired by the popular Bomberman series, you pick between multiple different characters in a game to defeat the other characters on the map using a plethora of bombs and other abilities that you pick up.
Graphics
I've found that the graphics are simplistic but make the most sense for what the game is going for since it resembles an arcade aesthetic. Most people shouldn't have any issue running this game on any type of computer made in at least the previous 10 years.
Music
The music in the game seems very repetitive and unpleasing to the point that I would recommend just turning it off and playing whatever you would like to listen to in the background.
Gameplay
While the gameplay is simplistic like the Bomberman series was when it first launched, it holds up pretty well as a simplistic flash game that you can play whenever you are looking to kill time. Consider playing other flash games though if you want something that has a bit more substance to it.
Difficulty
The game has a range of three difficulty systems that you can change from that make it accessible to small children to adults that are looking to challenge themselves. Other maps are available as well so that you have different maps to test the difficulties on when you find a single map has already been conquered.
Customization
Players can choose to build a character of different body types and clothing so that they can have something special that isn't the same as other players. I'd highly recommend this game for anyone who's looking for a flash game that has great customization in it.
Conclusion
While some changes in a sequel to Bomb It 5 could make it even better, this is a fun enough Bomberman clone that you might enjoy whether you are passing time in a classroom or don't have the resources to run a more intense game on your computer. 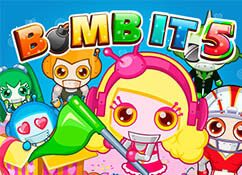