Ball Crash is created by the FRVR, the purpose of the game is to get us as an audience thinking. Every time a ball hits one of the numbers it decreases by one, so it ill takes careful thought to decrease the number of numbers there are. It may appear as if the numbers are placed randomly, but the right combination can help the player moved to the next level. The balls will continue to rise and increase in number after each round, you have a limited number of plays and must consider wisely which way to shoot the balls to decrease the number of numbers on the screen. At the bottom the game will automatically total the number of points scored so far. The gamer will also be able to tell when they level up and how much further it will take them to level up. Powerups are available for us gamers to complete the levels. This game is suitable for all ages and is extremely user friendly. I believe the target audience is women, children and gamers and I tested the game out with my daughter to see how user friendly it was. She was able to level up with ease and thoroughly enjoyed the game.

Shoot the ball down and let it bounce of the other balls. Each hit will decrease the number with 1. use powerups to help you finish the level. 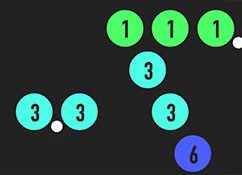 ×
Embed the game Ball Crash by adding the following html code to your website:

Link to the game Ball Crash with this code: