Tiles Of The Unexpected

Brick Breaker Endless is a unique game due to its endless nature. Most games will increase the difficulty as you level up, but the endless nature of the game does not include levels. Instead, the game's difficulty increases over time. As you successfully destroy the blocks that you are faced with an increasingly harder difficulty.

The Tetris style of this game includes the falling block nature like the popular game from the 1980s. Each block includes a number that is displayed within it. These numbers show the player how many times each block must be hit before it is destroyed. As each block is destroyed you receive an increase in your overall score. Then as mentioned earlier, the blocks will display higher numbers showing the increase in difficulty. Along with these higher numbers, the cannon will increase the speed at which it shoots out the balls.

To help the increase in difficulty the game presents you with power ups. There are a couple of power ups in the game, the first one that you will see is a boost in the speed at which the cannon shoots. This power up is referred to as "super speed", and it is displayed as a lightning bolt. The other power up that appears early in the game is "mega shoot". This power up is displayed as a bonfire, and makes the balls shot from the cannon larger.

The controls for the game are quite basic. You just drag the cannon from one side of the screen to the other to control where it shoots. There are some other features of the game such as the music and game sound. The music is an upbeat, techno type of music. The game sound is a beeping sound that occurs every so often.

Brick Breaker Endless is one of the many unique games on Bubble Shooter, and the endless nature of the game makes it nonstop fun for everyone in the family. 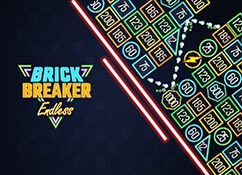