Zombie Pop, created by Coolgames and released in March 2018, falls in the class of mobile games known to define the “casual” genre. Players will find it easy to play and can easily get addicted to it if they are not careful. They must learn when to take time off and concentrate on other tasks, or they could find themselves spending all their free time on it. It’s recommended for players interested in playing games where all that’s expected of them is to take part in mindless color matching.

Players who have had a chance to play Candy Crush or Bejeweled will find this game relatively easy to play and follow. As suggested by its name, Bejeweled involves connecting gems, while Candy Crush requires the players to combine candies. In the case of Zombie Pop, the players will need to join the Zombie balls and try to make a combination of three or more balls. Playing involves swiping two balls to change their positions. The best part is that the game feedback has been carefully calculated, ensuring any person can play the game with ease. It doesn’t matter whether the player has ever seen or used a smartphone before! It only takes a few minutes for the player to figure out what’s expected of them. An objective will be displayed at the start of the screen. Players need to note that each level comes with a pre-defined set of moves. They, therefore, need to focus on scoring as many points as they can before they can proceed to the next level. Points are earned by lining up at least three zombie balls in a single row. Alternatively, the players could try to line up five balls to form an L. The balls must all feature the same color or be of the same type for them to connect. Why are players joining zombie balls? Well, only the game creators know the reason why. But once the players have connected enough of these balls, the level comes to an end, and happy music begins to play.

Connect all zombie balls. make combinations of 3 or more. The beginning of each level will show you your objective.

Zombie Pop is created by Coolgames. Coolgames is one of the largest online game studios. They have a rich portfolio with a lot of high clss titles. They have also created the following games: Bubbles 2, Tingly Bubble Shooter, Bubble Academy, Emoji Bubble, Jewel Academy, Merge Jewels, Bubble Charms 2, Bubble Charms, 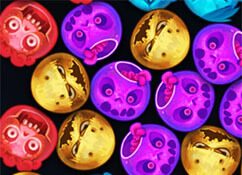 ×
Embed the game Zombie Pop by adding the following html code to your website:

Link to the game Zombie Pop with this code: