Matching games have been all the rage with their colorful board designs and simplistic gameplay. Tabby Island, introduced on the Bubbleshooter platform, has turned cute up a notch by adding some of the cutest balls of fur players have ever seen.

Tabby Island opens up to a short but helpful tutorial on how the gameplay works. This is a good thing as, unlike many three-match games, removing diagonal or adjacent pieces is not a thing. Many of the advanced functions are also operational at the beginning of the game.
For example, in level one, a player can draw the cursor in a diagonal motion and delete three or more cats in that line or adjacent spaces. The special abilities of powered-up cats are also active at the beginning of the game.
There are some familiar obstacles, such as blocks that begin to appear beginning in level two. From here, the challenge will increase with one or more obstacles. Review the instructions for the level carefully and prioritize how much of what barrier needs to be removed.

The level is over once the allotted amount of moves is completed. If the player fails to clear the hurdles before moves are gone, the mission is lost. However, the player manages to remove the obstacle with moves; leftover bonus points get awarded.

Be on the lookout for the special effects created by Tabby Island's cutest critters.
A crowned cat can perform various tricks, from deleting everything in a horizontal or vertical line to deleting everything with the same color.
Cats with red/yellow cheeks create an additional power boost.
The cat with a gem can accumulate their power. They will also create a variety of different power-ups
cats with stripes delete horizontal line open eyes

Tabby Island is not your average matching game. The most significant difference is that the cats do not have to be next to each other. They may be adjacent. Meaning that if you have two of the same color in a horizontal, vertical, or diagonal space, any cant that is not in the direct line can also be affected.

Use diagonal moves as often as possible to catch adjacent cats with fewer moves used. Create Power-ups when possible. They can mean the difference between failing and passing. Be alert to any special requirements to complete a level such as minimum points or removing barriers. Keep track of moves left; it is easy to lose count when trying to remove hurdles.

Connect 3 or more of the fluffy blobs. Make larger combinations for powerups.

Mouse: Drag a line to connect.
Mobile: Swipe a line. 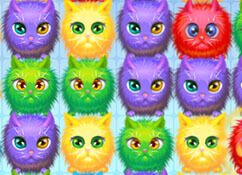 ×
Embed the game Tabby Island by adding the following html code to your website:

Link to the game Tabby Island with this code: