The game Alus Revenge 2 was created by the big game developer Arkadium and it's release date is September 2021. This game is a traditional collapse game where one needs to click on any group of two or more tiles of the same color to destroy or remove them. When destroying six or more tiles at a time, a Benben stone is created with special tile clearing powers that the players are able to utilize. Besides the new Alus Revenge 2, a lot of other games have also been recently created by Arkadium including Alus Revenge 1 and Alus Revenge 3. There are many more games on the way as well. Alus is one of the most beloved characters from Arkadium and he has had a very successful appearance in several video games such as Alus Revenge 2. Alus hails from the Aluria Kingdom and his main weapon is a bow and arrow which he conveniently fires at each Alus Revenge 2 tile. Alus is one of the strongest characters in Aluria because he can harness the power of ice to defeat his enemies. Alus is also great with Alus Revenge 2 because he can make small orbs of ice which knock out Alus Revenge 2 tiles in a single blow.

Initially when starting to play AR2 one is greeted by the evil genie who is upset with the present player for ripping his latest "Ancient Ruins Monthly" as he declares revenge on the player, the player must click on the play now button. Level one's goal is to destroy 100 tiles. With each passing level, the speed does increase noticeably and it becomes a bit more difficult to meet each level's goal. The number of tiles one must destroy increases with each level from level one requiring to destroy 100 tiles, level two requiring to destroy 150 tiles and level three requiring 188 tiles destroyed and so on. The game will end when the tiles reach the top of the screen, causing the player to start or attempt again. But if one is able to utilize the Benben stones correctly the player will reach their goal to escape and reach the next level. At times even earning bonus coins/points when exceeding the required tile soldiers destroyed. The game is fun and entertaining, keeping the player engaged and even anxious to destroy all tile soldiers required.

Click or tap the matching groups of tiles. Larger combos give you extra points. There will spawn new lines from the top if you are too slow. 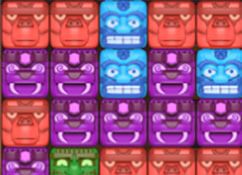 ×
Embed the game Alus Revenge 2 by adding the following html code to your website:

Link to the game Alus Revenge 2 with this code: