Silly Ways To Get Infected

I like the kind of video and online games that let you just leave reality and get into the "gaming zone." Worm Zone is just one of those games. If you're like me and you spent time in arcades years ago, you'll love the arcade-style play of Worm Zone. I played the game online and the concept is pretty straightforward, you're a worm. The game starts out with a small worm that I was able to control and maneuver through the landmine of food that was scattered throughout the game board. As I ate more and more the worm grew and maneuvering it became more challenging. Just as I thought I had everything figured out, more worms started to join in the fray. Every time I bumped into these new worms, I died and was given the opportunity to start the game over. I was also able to choose at the beginning either infinite play or a timed play sequence. I chose the infinite, because who wants to play this game under a deadline? I also found the cartoonish worm likable and fun to maneuver in the game as the controls are sharp and responsive. I also enjoyed the graphics as the colors are bright and the gameplay is a nice departure from the fast-paced and often over-complicated games of the modern era. I also found the soundtrack and sound effects during the game quite entertaining. The music is definitely reminiscent of arcade games or gaming consoles from back in the day. I think that the designers probably had that in mind and knew people would recognize the sounds. In the end, I think that Worm Zone is one of those perfect games to play while you're waiting for an appointment, in a doctor's office, or just need to blow off some steam and relax. I think most gamers would agree that Worm Zone is definitely a keeper that will be around for a long time to come. 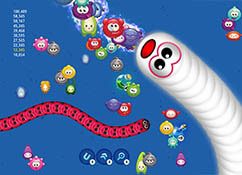