In general, Solitaire is just one of those classic games that you can mention in a large crowd, and almost everyone will know what you are talking about. It's an undisputed classic that has been reimagined time and time again, to no disappointment from lovers of the classic card game. There have been various versions from the classic tabletop to all the reiterations on our computers and mobile devices. Some versions even challenge the rules of the original, in very fun ways. One such example is Solitaire Quest Pyramid. As usual, you start out with all your cards, but the object of this version is quite different. Instead of building stacks the way you usually would, you have to build a pyramid with them, beginning at the top with the smallest number, and ending at the bottom with the largest. Any cards adding up to the number 13 must be discarded. While this version of the game is meant to test your patience and logic, it is still very fun and friendly for the whole family. You can take turns seeing who can build the card pyramid successfully, or have the family work together to figure it out. Either way, Solitaire Quest Pyramid is a great choice for the family. 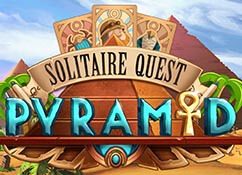