Embed the game Microsoft Solitaire Collection by adding the following html code to your website:

Link to the game Microsoft Solitaire Collection with this code:

Spread the love by sharing Microsoft Solitaire Collection on social media, your website, blog or other places.:

In Klondike, your objective is to stack cards out of the four suits, going from Ace to King, while stacking alternating colors in play. However, many of the cards start unrevealed, and being revealed and usable once their level is reached by moving every card below them, and, in the draw 3 mode, three cards are revealed from the upper left, but only the card on top can be used, and the others can be placed once they are on top. The game can be solved once all cards are revealed and in the seven columns.

In Spider Solitaire, the objective is to create King through Ace stacks from columns of cards, with a similar card unveiling mechanism to Klondike, and one, two or four suits in play. However, the difficulty stems from the card additions, which adds random cards of the selected suit level, which isn’t always the correct descending card, which needs to be moved to the corresponding above card.

In FreeCell, the cards are all revealed and placed in random order, but the objective is to build the stack of each suit from Ace to King, and alternating color stacks similar to Klondike. However, the gimmick rests in that you can only move as many cards at once as free spaces, and four free spaces for placement are provided (Hence FreeCell).

In Pyramid, you have a pyramid shaped board of the four suits of cards, and a one or two cards revealed at once. The objective is to match cards to make thirteen, and clearing the pyramid wins.

In TriPeaks, the objective is to clear the triple pyramid formation by using the deck to clear a card above or below the current card’s value. 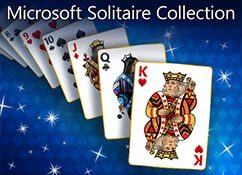