Embed the game Spider Solitaire FRVR by adding the following html code to your website:

Link to the game Spider Solitaire FRVR with this code:

Spread the love by sharing Spider Solitaire FRVR on social media, your website, blog or other places.:

If you have some time to kill and you like simple solitaire games, FRVR has some great versions to choose from. Naturally, this includes spider solitaire. For those who aren't familiar with it, spider solitaire is a patience game in which you have to assemble two decks of cards into eight runs of cards of the same suit ranging from the king down to the ace. 54 cards are dealt into ten piles face down except for the top card, while the remaining cards are placed in piles of 10 on the table. As you arrange the cards in the proper order by suit, you will be able to flip more cards face up. If you can't make a move, you can deal one of your piles of ten cards onto the table. Once you've arranged your cards into a proper run, you can clear them from the table. Clear all the cards and you win. Since spider solitaire is a patience game, you will win eventually as long as you keep playing./p>

That's the gist of spider solitaire. As for Spider Solitaire FRVR, it's a great interpretation of the game. It's easy to play, has a great interface, tracks your progress for each game, and can be shared on Facebook. The game can be played with one, two, or all four suits as well. One suit is fairly easy and can usually be finished in about 15 minutes or so, but things get progressively harder from there. Needless to say that you'll have your work cut out for you when you start playing with four suits. Then again, as long as you have the patience to keep playing even when your table is a mess, you can win your round of Spider FRVR./p>

As far as online solitaire games go, it's hard to go wrong with Spider FRVR. Not only is it as addictive as solitaire games can get, but it's easy to log on and play a quick game whenever you want. Give it a try the next time you have some time to kill.

Spider Solitaire FRVR is created by FRVR. FRVR is a large game studio located in Malta, they have made some of the best online games. Their games guarantee a long play time. They have also created the following games: Bubble Shooter FRVR, Hex FRVR, Solitaire FRVR, 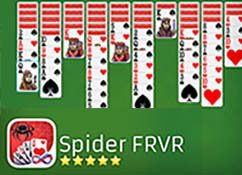