The design of the game is simple so you can focus on the game as much as possible. This is the ultimate example of game play before looks possible. Our players love this version.

The top 3 scores are saved so you can try to beat it each time you play.

Match the particles and make combinations of 3 or more. Clear the field from all particles.

Particles Bubble Shooter is created by Gameboss. GameBoss.com is a casual video game company that primarily develops HTML5 games. They founded in 2016 and released some great titles. They have also created the following games: Bubble Shooter Classic, 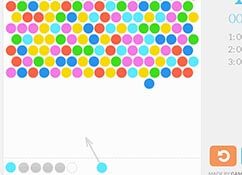 ×
Embed the game Particles Bubble Shooter by adding the following html code to your website:

Link to the game Particles Bubble Shooter with this code: