We have been given a new game thanks to the people over at best game free play but not a lot of people know how to play since it's pretty new. They are also the guys behind some of the other games like monster shooter defense & bubble shooter. Then they went on to make magical bubble shooter as well as among us. So what is this new game they have made for us & how do you win it? Well, the objective of this is to shoot the bubble monsters as much as you can so you can complete the level & move on to the next one. If you're on your phone, you can tap on the screen in an effort to change direction & drag them all over the screen. You then have to release your finger if you want to shoot it. If you are on your lap top or desk top, you use your mouse to click if you want to be able to shoot your ammo. The idea for you is to match all the colors in the right place as well as aim for the right one. If you want to break the bubbles, you have to connect three bubbles or more & as long as they are the same color, they will be cancelled out. Once you have gone on to break them all, you will be able to move on to the next level & this will go on for a while until such time as you have gotten to the end of the game. The good news is you can play it on any device you have so you will be able to use it on both ios & android. It is known to be one of the match 3 games & you are able to play it for free if you want to see what it is all about. It has since been known as one of the shooter or cute games. It combines the concept of the shooter with the notion of the match game & this is why it is one of the most popular of its time. If you want to play it, you can check out the match 3 category to find the CMB game. But the thing to keep in mind is as long as you have fun you will always be a winner.

Shoot the cute bubble monsters and complete the levels. 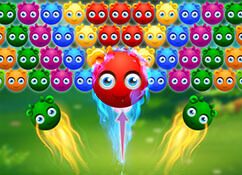 ×
Embed the game Cute Monster Bubble Shooter by adding the following html code to your website:

Link to the game Cute Monster Bubble Shooter with this code: