Play Bust-A-Move online on bubbleshooter.net, Bust a move is released in 1994 and created by Taito. It was a popular game in arcade's and does have a very familiar soundtrack. It is since then release to different game consoles. It was first released on NeoGeo, featured stereo music.

The goal is to complete all levels of Bust a move, this is fairly challenging, most levels are easy but some levels are very hard. Like level 9, most players don't go behind that level because of it's difficulty. A side goal is to score as many points as possible, there are huge gaming contests based on scoring the most points possible in bust a move. A popped bubble is worth 10 points, but dropped bubbles (Bubbles that are hanging only on the bobbles you pop) are worth more points. This score multiplies, the seconds hanging bobble is 20 points, the next 40, after that 80, 160 and so on. If you pop 17 bobbles you earn more then 1.300.000 points. 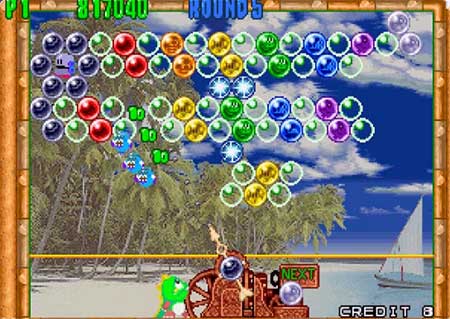 The version that is in most arcades. 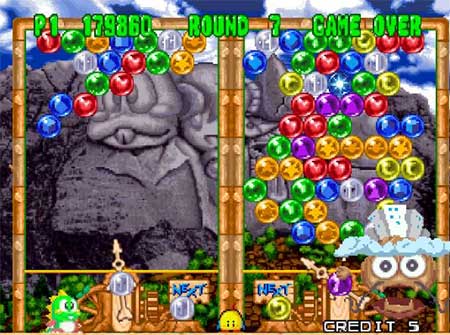 The original bust a move featured an multiplayer game mode. It is one vs one, you must score as much points as possible before you are game over.

This is a gameplay video where you can see us play bust a move, it features basic gameplay and a few levels.

Bust A Move is created by Crazygames. Crazygames is a large game publisher that hosts some of the most popular games. They have also created the following games:
Copyright 2021 Bubble Shooter
Bubble Shooter | Games for your site | Add game | Cookie Policy | Privacy Policy | Contact | All games | Blog

×
Embed the game Bust A Move by adding the following html code to your website:

Link to the game Bust A Move with this code: