You may know that there is a card game out there known as spades but now that the web is a big thing nowadays, you also have the option to play it online if you so choose. So how do you play this type of game on a computer? Well, you just use your mouse to select the cards that you wish to play but, if you are playing it on a mobile app, then you just tap the cards with your thumb. This game is set to be released in August of 2021 at which point you can play it to your heart's content. In the game, you are playing with 3 other people and this is divided into 2 teams. The goal is to get more points & whoever gets to 500 first is declared the winner. So to play, you need to guess how many tricks you can take before each round. Once you have placed your bid, you add them all up & the total is how many tricks a team has to get in order to come out with a score that is not in the negative. The person to the dealer's left is the first player who has to bid &, from there, it goes counter clockwise. You are able to bid on any number between 0 and 13 but it is important to be strategic & remember that it is hard to get a lot of the tricks. Once all the bidding is complete, the player to the left has to play either a heart, diamond or club. Then it goes clockwise until each player has laid down a face up card. But keep in mind the card has to be the same suit as the first card that was played. If you do not have a card that matches the suit, you can play any suit you want. If someone ends up playing a spade, it trumps every other card unless someone played a higher spade. Whoever wins the trick leads the next one. The idea is you want to get at least as many tricks as you bid, if not more. If you get 5, it multiplies by ten which puts you at 50 but anything after that is only worth one point. If both teams get to 500 at the same time, whoever has the higher score is declared victorious.

This is the classic Spades version with 4 players.Make your bid and win the game. 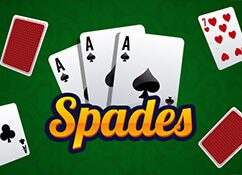 ×
Embed the game Spades by adding the following html code to your website:

Link to the game Spades with this code: