Bubble Shooter is an arcade game that gives hours of fun for players. As the player moves to the next level of the game, the difficulty level also increases and this makes the game absorbing.

Overview
The Bubble Shooter game can be played on a PC, Android phone or, iOS phone. Some versions of the game can be played on Skillz, a mobile eSports platform, or Facebook. A field full of colored bubbles that look like marbles appears before the player. The player has to form groups of marbles that have the same color and clear the field by shooting them. The player scores points according to the number of marbles shot and destroyed. Players get high point scores if they shot many marbles in one shot. The player wins the game when all the marbles are cleared from the playing field. When the line at the bottom of the screen has all the marbles, the game comes to an end. 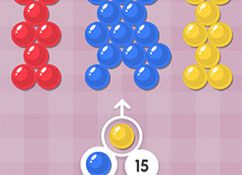