Mahjong is a classic memory matching game that has become popular on a lot of mobile platforms. There have also been quite a few versions of it that players never seem disappointed by. One of the latest versions of the game is called Zodiac Mahjong. At the beginning of the game, the player is shown a screen with a number of overturned domino-type blocks. When you tap or click them, they flip over and show the player an image.

The object of the game is to memorize and match two images at a time, at which point those two blocks will disappear, exposing more clearly those underneath it. The player will not be able to tap or click any of the blocks unless they are directly exposed, meaning not underneath another block. Sometimes, there are little tricks to the matching images. For example, some of them will not be exactly alike, but will be directly related in some way.

The player's main goal is to clear the board of all the images before time runs out. However, be careful not to just click a block because you remember which image it contained. This is a strategy game, so it is necessary to pay attention to the blocks and where they are located. If you click the wrong block, you will not be able to reach some of the images trapped underneath other blocks, rendering your effort pointless.

In this particular version of the game, all of the images are zodiac based. This game is family friendly, so feel free to let the kids play. You can also take turns playing the game, or put your heads together to help one another clear the board in time. Either way, this game is a fun, classic way to pass the time.

Zodiac Mahjong is created by Coolgames. Coolgames is one of the largest online game studios. They have a rich portfolio with a lot of high clss titles. They have also created the following games: Bubbles 2, Tingly Bubble Shooter, Bubble Academy, Emoji Bubble, Jewel Academy, Merge Jewels, Bubble Charms 2, Bubble Charms, 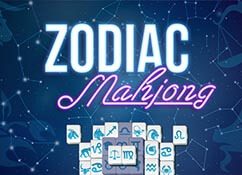 ×
Embed the game Zodiac Mahjong by adding the following html code to your website:

Link to the game Zodiac Mahjong with this code: