Toon Cup 2021 is a brand new game. The player is able to represent their home country in the game. It offers the ability to choose countries from the Americas, Western Europe, Eastern Europe, Africa and Middle East, and Asia Pacific. There are a total of 72 different countries to choose from.

After the player chooses their characters, a display appears to show the 3 characters they have selected. Depending on what game mode the player chose, the player is shown which team they are matched up against. After this, the player is given the option to play a tutorial to learn how the game and controls work.

If the player chose to do the learning tutorial, the game will begin afterwards. The player will notice that there are blue boxes scattered throughout the field. These blue boxes contain power ups such as freeze and snow ball. There are also gold coin bags on the field that the player can collect as well. The duration of each game is 1 minute and 30 seconds. The player must win the first game to advance to the next one in tournament mode. Leaderboards are also shown to the player displaying the different standings of the countries competing in the tournament.

Choose your country and play the Toon Cup, win all matches to become the champin.

Keyboard: use the arrow keys to move and the spacebar to shoot.
Mobile: use the on screen controls to move your character and shoot. 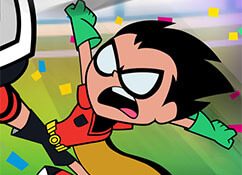 ×
Embed the game Toon Cup 2021 by adding the following html code to your website: