The Super Bubble Shooter website is a website that offers a variety of different games that can be played for free. When you first get on the website, you will notice that it is very colorful and has various tabs at the top. The tabs that can be found at the top of the page allow the players to access all bubble games, new bubble games, popular bubble games, something called match-three, and much more. In the middle of the website, there is a screen that reads play and if you press the play button, you will be able to play the Super Bubble Shooter games. The video screen side has different types of bubble shooter games such as bubble extreme, bubble woods, bubble hit, and a few others.
At times advertisements do pop up to the right of the video screen. At the bottom of the Super Bubble Shooter video are ten more tabs and these tabs read fullscreen, bubble shooter, puzzles, solitaire, and much more. You can find the copyright information, the most played games, and all the different categories of games on the bottom of the websites.
Who Will Rise To The Challenge?!
Popping bubbles has never been so much fun, or so hard to resist! Those who take aim become immersed in this original arcade-style bubble shooter where the goal is much simpler to explain than it is to achieve: Without running out of bubble ammo, pop all of the bubbles in each level by matching at least three of the same color! Simple, right?
Onward!
Challengers unlock new exceedingly difficult episodes as they progress through fifteen levels of strategy-based puzzles for each episode. It's a cinch to begin with, and contenders are trained along the way to ensure their mastery!
Scores are maximized by popping all of the bubbles with as few shots as possible! Earning triple-star ratings on each level is a masterful endeavor reserved only for the most capable shooters!
It Shoots... EVERYTHING!
The only weapon of choice for a bubble-matching hero: The Bubble Cannon! Equipped with aiming assist to help challengers land the perfect matches every time! It also has the added benefit of a next-shot preview! This simple feature guarantees that no one will never have to wonder what will pop out next!
Through early progression, challengers will be given different ammo which will prove useful in certain situations. When these situations arise it's important that challengers utilize their tools as suggested... Or blast their way through whatever obstacles they want!
The arsenal speaks for itself:

Bombs are right at home destroying those pesky rock bubbles that never match anything. Rainbows are wildcards! They are used to pop clusters of any color. Thunder shots will instantly pop an entire horizontal row. What would happen if one of these hit the very top row of bubbles?... Hmm. Stars will pop the bubbles that have shield protection. Normal bubbles of the same color can clear the shields, but only stars will pop them as they clear the shield simultaneously!
Not To Burst Anyone's Bubble
Challengers will encounter obstacles, pitfalls, game-ending bubbles, and some very tough levels requiring some very strategic bubble shooting! It's as easy as popping bubbles! Anyone can invite friends, family, coworkers, neighbors, or anyone else who might have the bubbles to beat their high scores! After all, it's completely free! 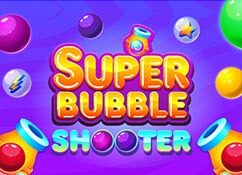 ×
Embed the game Super Bubble Shooter by adding the following html code to your website:

Link to the game Super Bubble Shooter with this code: