Om Nom Bubbles is and online game created by ZeptoLab. The game was officially released on online gaming sites in October 2011. The goal of the game is to feed Om Nom characters which are the main characters as many bubbles as one can without trapping him into a bubble wall or allowing fruit juice to spill from his mouth over one hundred levels. The player plays as an unnamed chef and aims the small cannon towards the desired color of bubble that they want to shoot from it. They must collect bubbles of the same color three or more times in order to clear the level. The player can also use bombs to drop some lines of bubbles from above, so that when a few blocks are broken, all of the remaining bubbles will fall down. Each time a level is cleared the player will level up and the scenery changes facing in a mansion with more rooms and serving the players from different parts of the world like India, United States, Japan, Germany. The chef has to travel all over his mansion for his quests if that was intentional.

Om Nom bubbles offers the player lots of options like collecting score gems by splitting five similar colored bubbles and collecting power-ups that help clear those difficult levels with ease. It also features a level editor where players get to design their own levels and can share them with their friends and the world. Om Nom bubbles has been featured on popular gaming sites like CNET, Joystiq, The Huffington Post, Gamezebo and more.

In the beginning one can play the game with ease but as it progress to higher levels it becomes harder to aim and fire at similar colored bubbles. The player has to use strategy and aim strategically but every mistake one makes will cost the player one heart bubble, if the player looses all of them then it is game over. The power-ups in this game are activated by touching the blue bubble that appears on the screen when clearing a level, there are multiple types of power in the game like the hero bubble that will allow one to choose a bubble and fire it at any direction.

The game has been developed by Voodoo Games a renowned studio that specializes in casual games and is available for phone download or online play. The game is simple, colorful and easy to play.

Make combinations of 3 or more bubbles to make them pop. Score as many points as possible in 60 seconds. 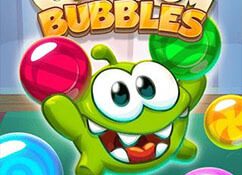 ×
Embed the game Om Nom Bubbles by adding the following html code to your website:

Link to the game Om Nom Bubbles with this code: