Mahjong is a classic style memory and matching game that has become popular among a lot of mobile gaming platforms. There are several alternately themed versions of the game, and the gameplay is usually the same or similar. One of the most recent versions of the game is Mahjong Journey.
Like the original game, the player starts off by looking at a screen set up with a few layers of tiles overlapping one another. Also like the original, the tiles have all sorts of different images on them when the player clicks or taps on them. The difference in this version is that there are several levels, each themed based ln a different city.
The overall object of the game is to tap and match two images at a time before the clock stops ticking. Once you have matched two of the same images, those tiles will disappear from the board and free up a few tiles on the second layer. However, there will be a need to stop and think before the player starts clicking on all of the exposed tiles just because they know what image is underneath. This game is made to test one's logic and patience, so the catch is that the player must pay attention to where the tiles are located. If the player clicks or taps on the wrong tile at any point, this could hinder the chance of progressing any farther in the game, because some of the matching tiles are already trapped underneath the top layer, and once you have no more matches, the game is void and the player has to reset.
This game is appropriate for all ages, so the kids are safe to play. You can take turns playing the game or play it together. Either way, it is a fun, excellent way to pass the time.

Mahjong Journey is created by Coolgames. Coolgames is one of the largest online game studios. They have a rich portfolio with a lot of high clss titles. They have also created the following games: Bubbles 2, Tingly Bubble Shooter, Bubble Academy, Emoji Bubble, Jewel Academy, Merge Jewels, Bubble Charms 2, Bubble Charms, 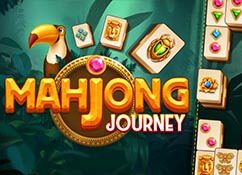 ×
Embed the game Mahjong Journey by adding the following html code to your website:

Link to the game Mahjong Journey with this code: