The purpose of Ballistic is for users to have fun playing a game. This bubble shooter type of game involves shooting a ball into tiles to break them and move to the next. There is a number on each tile which represents how many times someone must hit it. The game is played by hitting the tiles by clicking and dragging your mouse in the direction in which someone wants to shoot. Throughout the game, there are more things that can be done. One advantage to the game is the ability to gain more balls to shoot and there are many tools that can help players through the game. The tiles are different numbers, becoming higher the longer it is played. If the tiles reach the bottom, the game is lost.

This game is for online and casual game players. It can be played whenever someone may want to. People also do not have to play it constantly to advance in the game. If leaving the game is decided, coming back is an option because people have the option to choose the level you were previously on and start from there. There are many options within this game. People can play with their friends or alone, so it is available to everyone.

Shoot the balls onto the tiles, hit them the amount of numbers displayed on the tiles.

Mouse: Click where you want the balls to shoot.
Mobile: Tap and drag to aim and shoot. 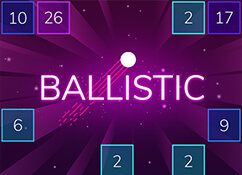 ×
Embed the game Ballistic by adding the following html code to your website:

Link to the game Ballistic with this code: