A lot of people might know and play mahjong if they are getting up there in age but the truth is it's not just for old people anymore. Thanks to the web, a whole new generation of kids are finding it for the first time in the form of alien mahjong. So just what is this new variation on an old classic and how do you play it? Well, it's quite simple; in the game, you are presented with columns and rows. Some of them have aliens in them while others have robots or even a ray gun. Now if you're on a mobile device, you want to tap on each one to switch their places in an effort to get 2 aliens in a row. Once you have done that, they will disappear. If you're on a laptop, you want to use your mouse to line them all up. The goal is to keep doing this until all of the aliens are gone and this is when you win. The game has been created by adgard and they are also the brains behind some of the most famous games out there such as bubble shooter. In the game there are 3 levels and to win, you must beat all of them. If you want to win, you have to match at least 2 at a time and keep it doing in an effort to come out on top. You can use the bomb feature if you think you have run out of matches and thus do not have any other way to win but it is to be used as a last resort. You can even make tiles of your own in a new connect game and this will help you design a game that you want to play. If you need to blow it all up it should only be used if you have no other options left. This is how you begin to make a game that people around the world will love. The game first came out back in late Aug and it hopes to be the next big thing with kids all over the world. To learn more about how you can play the game and beat all of the levels, you can check out the web site to see what it is all about and where you can play this fun game with friends.

Find 2 of the same Aliens and click or tap them to remove. Remove all Aliens.

Alien Mahjong is created by Adgard. Adgard creates the most beautiful mahjong and other casual games. They have also created the following games: 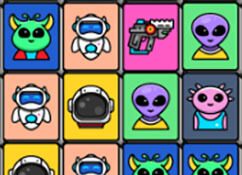 ×
Embed the game Alien Mahjong by adding the following html code to your website:

Link to the game Alien Mahjong with this code: